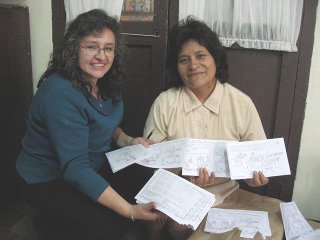 I come from LaPaz, Bolivia. I am not a Quechua or Aymara speaker. I wish I could speak one of these languages, but in school they teach us only Spanish. My mother knew some Quechua but she did not talk it to me in at home.

I am the first one to became a Christian in my family. My family was from Catholic religion, but not committed.

A Christian friend in school invited me so many times to her church, until I decided to go. The same day I gave my life to Jesus. They preached a very clear messages about the love of Jesus for me, and the great opportunity I had to be forgiven of my sin and have eternal life.

I had a great pressure from my family when I became Christian, I was 17 years old. My brother conficated all my Bibles, my parents said I was not to go to church, nor talk on the telephone with any of my Christian friends. It was very hard.

One day I told my brother, "You are taking away everything, but one thing you cannot take away the love of Jesus in my heart."

Three or four years passed. Then I made the decision to go back to church. My family at that particular time were not against it. After that my mother became a Christian and my father also. Today my brother listens to me, respects me, asks me for prayers, but is not yet a believer.

When I was serving the Lord with the Street Children Ministry, my pastors told me to go to a missionary conference.

It was my first time at a conference like that and, to my surprise, the conference was all about the Muslim World. An Indian couple, former muslims, were sharing with passion about missions and the great need to preach the Gospel to these people.

I was so touched by their message and I cried a lot. Working with the Street kids was one of the most needy local groups and I was challenged. But there are other people group in the world with less opportunity, but greater eagerness to listen the Word of God. From that day God called me to work and pray for the missionaries, though I did not know them or when God would open a way for me.

After one year, I met Julio at another conference on Christian Education. Julio had a clear passion for Muslims and he was praying for the Somali. people. When God confirmed His will in our lives we got married in 1992. He also confirmed His will for us to go to serve among the Somali people in Kenya.

We started our training to go to Africa. Julio was already a missionary and pastor in Bolivia. We did studies in English, Missions, Islam, etc. Finally we arrived in Africa in 2000.

We have been serving God here in Kenya among displaced Somalis refugees for 8 years. Our aim is to disciple, train leaders and plant churches in the Somali communities.

We do all kinds of other small projects to help refugees to get more training and support themselves. In our small congregations we have many children. We have sowing classes, translations projects, TIMO (training missionaries to work among Somalis), Literacy and are helping to developed more materials for children and adults. In this we are using Manna books published by Manna Publications (USA).

We really appreciate their love and passion to preach the Gospel around the World through literature. I like and use the Manna for Children books in my literacy classes. The adults like them as much as the children.

A nurse took THE POWERFUL LANTERN in Somali around the hospital wards. When the patients could not red the words, they read the pictures and the Nurse explained the gospel to them.

I have a doctor who is translating into Arabic and others who are translating Manna books. One of the young men I have trained will become the Manna Distributor in this part of Kenya.

God is good and has blessed our work for Him.

Back to the Distributors' index